A public health campaign, the Sleep On Side campaign, led by the charity Tommy’s, to educate women about the risk of going to sleep on their back in late pregnancy, launched today. 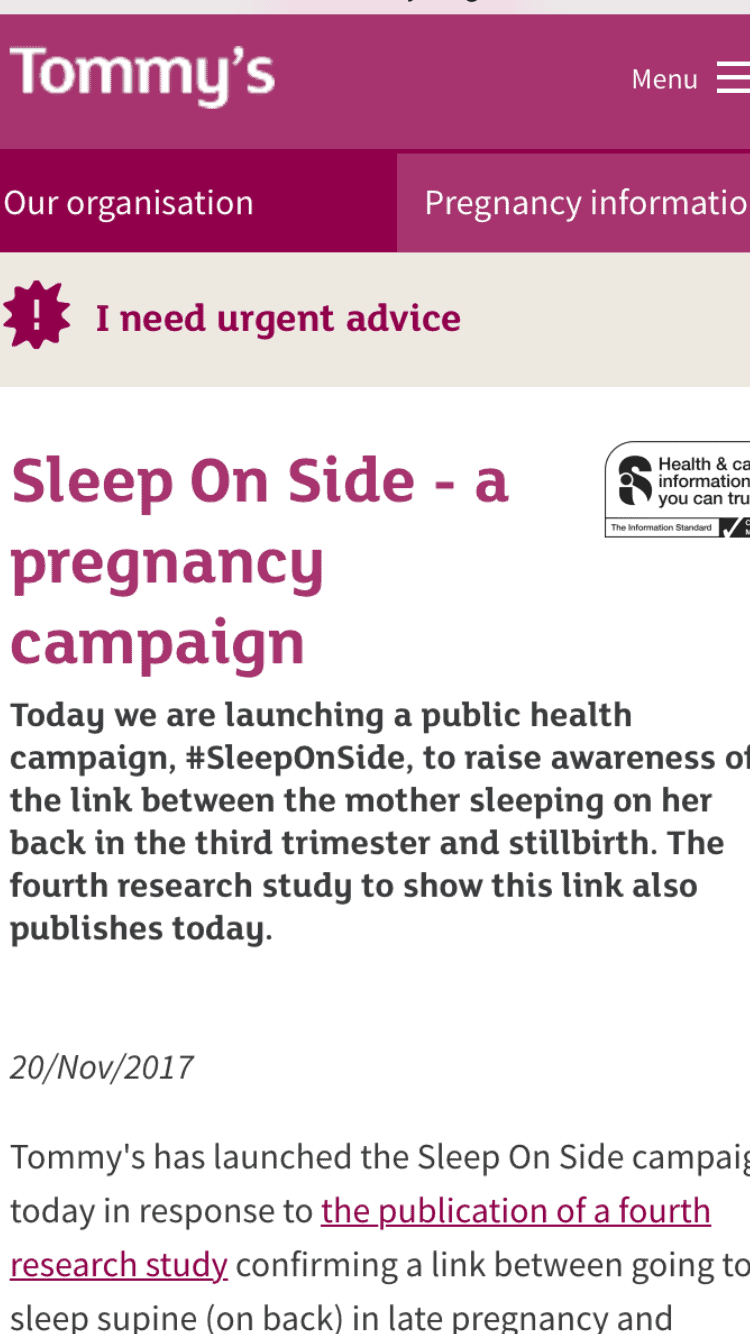 - The Midlands and North of England Stillbirth Study (MiNESS), published today (20/11/17) in BJOG: An International Journal of Obstetrics and Gynaecology, is the largest study of maternal sleep position and risk of stillbirth.

- The study was funded by Action Medical Research, Cure Kids, Sands and Tommy’s

- The increased risk associated with women going to sleep on their back has now been demonstrated consistently by four studies in women of different ethnicities and in different countries.
- If all pregnant women in the UK went to sleep on their side in the third trimester, MiNESS estimates a 3.7% decrease in stillbirth, saving around 130 babies’ lives a year.

- Internationally, this advice has the potential to save up to 100,000 babies a year.

- Around 1 in 225 pregnancies in the UK end in stillbirth.

Led by Professor Alexander Heazell, Clinical Director at the Tommy’s Stillbirth Research Centre at St Mary’s Hospital, Manchester, MiNESS is the largest study to examine maternal sleep and late stillbirth. It looked into 291 pregnancies that ended in stillbirth and 735 women who had a live birth. It confirms findings from earlier studies in New Zealand and Australia that, in the third trimester (after 28 weeks of pregnancy), pregnant women who go to sleep on their back are more likely to have a stillbirth.

Although researchers cannot say for certain why the risk is increased, there are several theories. In the third trimester, when the woman is lying on her back, the combined weight of baby and uterus (womb) puts pressure on the main blood vessels that supply the uterus, and this can restrict blood flow/oxygen to the baby. Other possible explanations include disturbed breathing during sleep, which is worse when a woman sleeps on her back and in overweight or obese women, who also have an increased risk of stillbirth.

The advice to pregnant women is to go to sleep on their side for any episode of sleep in the third trimester, including:
· going to sleep at night

· returning to sleep after any night wakenings

As the going-to-sleep position is the one held longest during the night, women should not be concerned if they wake up on their back, but should simply roll back onto their side.

The MiNESS study did not find a difference in risk between sleeping on the right or left side. One of the previous studies did show that sleeping on the right increased the risk, but as this was not found in the other three studies, the Tommy’s Sleep On Side campaign recommends that women can go to sleep on either side.

Professor Heazell, who is also Senior Clinical Lecturer in Obstetrics at and the University of Manchester and Honorary Consultant at Saint Mary’s Hospital, says:

“Around 11 babies are stillborn every day in the UK. Stillbirth is devastating, with long-lasting effects on bereaved parents. Parents want to know why their baby has died, whether it might happen again if they try for another baby and what they can do to avoid further stillbirth.”

At the Tommy’s Stillbirth Research Centre, we work to identify what we call ‘modifiable risk factors’ for stillbirth. These risk factors are things in day-to-day life that increase expectant mothers’ chances of having a stillborn baby that, importantly, the women have the power to alter, either alone or with medical help.”

We believe that identifying, and avoiding, risk factors that are strongly associated with stillbirth will reduce the number of babies who are stillborn. The MiNESS results have implications as they indicate that if women go to sleep on their side in late pregnancy rather than on their back there could be 3.7% reduction in stillbirth.”

The four charities, Action Medical Research, Curekids, Sands and Tommy’s, who funded the research have put out a joint statement:

“This research and campaign was only made possible with funding from our four charities, which are supported by parents who have experienced stillbirth. We hope that this information will help parents and reduce the number of babies who are stillborn each day”

“This is an important study which adds to the growing body of evidence that sleep position in late pregnancy is a modifiable risk factor for stillbirth. This new research is extremely welcome as a significant number of stillbirths remain unexplained, particularly those in late pregnancy. The impact of stillbirth on parents and professionals is devastating and the RCOG is committed to working collaboratively on research, audit and training for healthcare professionals in order to achieve a substantial reduction in the UK stillbirth rate.”

Louise Silverton, Director for Midwifery at the Royal College of Midwives, said:

“Stillbirth is a terrible tragedy for mothers and their families and we must do all we can to bring stillbirth rates down.
This addition to current knowledge is very welcome. The Tommy’s campaign and the research findings are a great example of how through making small changes we can begin to bring down stillbirth rates. It is a simple change that can make a difference and it will be important to ensure that this is communicated effectively to women.”

Tips for going to sleep on your side in the last three months of pregnancy
· Put a pillow or pillows behind your back to encourage side-sleeping.

· If you wake during the night, check your position and go back to sleep on your side.

· Pay the same attention to sleep position during the day as you would during the night.

· If you wake on your back during the night, don’t worry, just roll onto your side.

I was asked for my comment on this new research on Sky news.

In my own experience of pregnancy 3 times and talking to other mums, for the most part we all chose the side sleeping position anyway, near the end of the pregnancy, because it is the most comfortable.

Any new research that can lower the rate of babies dying is always welcome, but I do think we need to be sensitive to the feelings of mothers who have already lost babies due to still birth.

They are likely already wondering what they could have changed to have prevented the tragedy of their baby dying and blame themselves, so this type of news will only add to the guilt they are already putting on themselves.

Millions of mums all over the world have slept on their backs during the third trimester and still delivered a healthy baby, so although it is great that research continues to be done, it has to be careful to not upset and blame the people it is trying to help.

If lying on your side during pregnancy can as much as halve the rate of still birth, then this new research needs to be shared and promoted to every pregnant mum no matter where they live, to raise as much awareness as possible and save the lives of more babies each year

What are your thoughts on this new research?

I would love to hear them…..

This is one of my ‘official author photos’ from my… 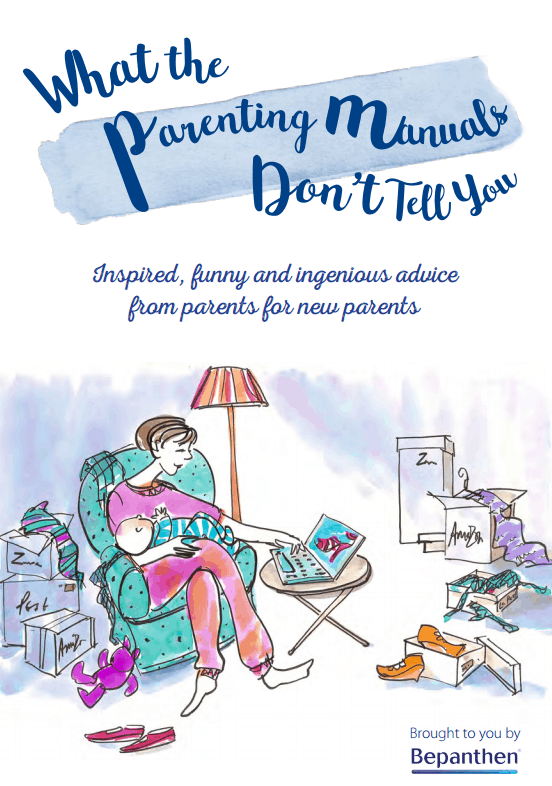 What the parenting manuals don’t tell you 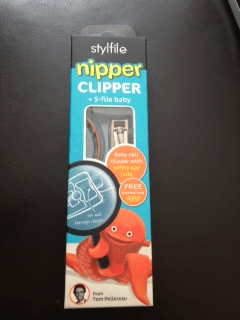